This month, we mark three important events: International Harm Reduction Day on 7 May, World Vape Day on 30 May and World No Tobacco Day on 31 May. In spite of the dualistic impression one derives from the war-like language that often mars discussion between ‘tobacco control’ and ‘tobacco harm reduction’ (THR) communities, they actually share a common goal: to minimise tobacco-related disease and premature death.

The harm reduction approach is already enshrined in Article 1d of the World Health Organisation’s (WHO) Framework Convention on Tobacco Control (FCTC). And yet their policies and public discourse do not reflect this. In a recent update of the WHO website’s Q&A section about e-cigarettes, they continued to assert the following: • E-cigarettes are ‘dangerous’, ‘harmful’, and ‘toxic’ – with no reference to the relative risk compared to combustible cigarettes • E-cigarettes provide a gateway for youth to cigarettes – this claim is not backed by any robust evidence, and has in fact been refuted by numerous public health experts • Vaping can cause lung injury, misnamed ‘EVALI’– a misrepresentation that is 'killing people' • “To date, evidence on the use of ENDS as a cessation aid is inconclusive” – please refer to the Cochrane Collaboration’s living systematic review indicating that e-cigarettes do help smokers quit cigarettes, and probably more effectively than nicotine replacement therapy.

This misrepresentation of facts is squandering the opportunity to help millions of smokers switch to much less harmful products, such as nicotine vapes and pouches. Herein lies the difference in approach amongst THR advocates; backed by evidence and pragmatism, THR supports the provision, rather than prohibition, of safer alternatives to those who are struggling to quit cigarettes. Here are six ways in which harm reduction differs to prohibition:

In the FCTC’s biennial Conference of the Parties (COP) meetings, ministers from around the globe convene to share their progress on implementation of tobacco control measures. These fora provide an opportunity for international cooperation. The problem is that they exclude any perspective sympathetic towards harm reduction, despite reasoned imploration from hundreds of independent experts. Within these ideologically confined meetings, awards are given to those who toe the dogmatic line of condemning vaping. Astonishingly, in 2019 India’s health minister was lauded with special recognition for his country’s ban of e-cigarettes, despite robust evidence that they are at least 95% safer than cigarettes. Rather than viewing all nicotine use with irreconcilable hostility, harm reduction advocates acknowledge that nicotine is not the enemy. They are open-minded about the continuum of risk of products, with the ultimate aim of helping people move away from the most harmful ones.

After a recent ban of e-cigarettes in Hong Kong (despite evidence that they are helping reduce smoking rates), two people were recently arrested for selling nicotine vaping products. Whilst the sale of cigarettes remains legal and widespread, the cost of selling e-cigarettes is up to 6-months imprisonment. In contrast, on the Isle of Man, a 2008 ban on tobacco in prison led to inmates smoking illicit materials, including banana peels, tea bags, and nicotine patches. In response, a pilot scheme introduced the provision of regulated e-cigarettes for inmates to use in their cells and outdoor spaces. Since the trial began, there have been 58% fewer behaviour warnings, a 25% increase in intention to quit smoking, and an annual saving of £8500 on nicotine patches.

Riding in a car is an activity with inherent risks. Reasonable steps can be taken to minimise driving-related harm, such as seat belts and speed limits. Similarly, harm reduction proponents accept that e-cigarettes, like driving, are not completely risk-free. However, there is increasing evidence, beyond reasonable doubt, that they are significantly safer than cigarettes. Bearing this in mind, and the fact that merely 4-7% of smokers succeed in quitting using traditional measures, the pragmatic approach is to offer safer alternatives. A randomised trial published in 2019 showed that using e-cigarettes nearly doubled the chance of quitting smoking compared to nicotine replacement therapy.

As described earlier, the WHO’s current stance is that “evidence on the use of ENDS as a cessation aid is inconclusive”. This statement is ideologically driven, rather than evidence-based. In contrast, a growing list of reputable and independent public health organisations and experts are acknowledging the tremendous potential of vaping to displace smoking and improve individual and population health. Two former directors of non-communicable disease control at the WHO, Prof Ruth Bonita and Prof Robert Beaglehole, have said: “WHO’s continuing disregard of the wealth of evidence on the value of these products is condemning millions of smokers to preventable disease and premature death.”

At the recent E-Cig Summit in Washington D.C., Marc Slis delivered a memorable address as an ex-smoker, vaper, and vape shop owner. Commenting on the anti-vaping lobby’s scaremongering campaigns, he said: “Smokers are treated as acceptable collateral damage in a war against Big Tobacco. You trained the public to despise us. You trained us to despise ourselves”. It does not need to be this way; harm reduction practitioners are committed to meeting people ‘where they are’ in their lives without judgement. Harm reduction focuses on motivating positive change through facilitation rather than coercion.

A prime example of prohibitionists’ authoritarian approach is how the International Network of Nicotine Consumer Organisations (INNCO) has been repeatedly denied observer status to the FCTC’s COP meetings. Rather than engaging with the very people impacted by their decisions on a daily basis, WHO continues to exclude them from the conversation. Conversely, harm reduction strategies emphasise the importance of empowering people to have control over their own health in order to live healthier lives. It respects people’s consumer rights, including the right to choose. 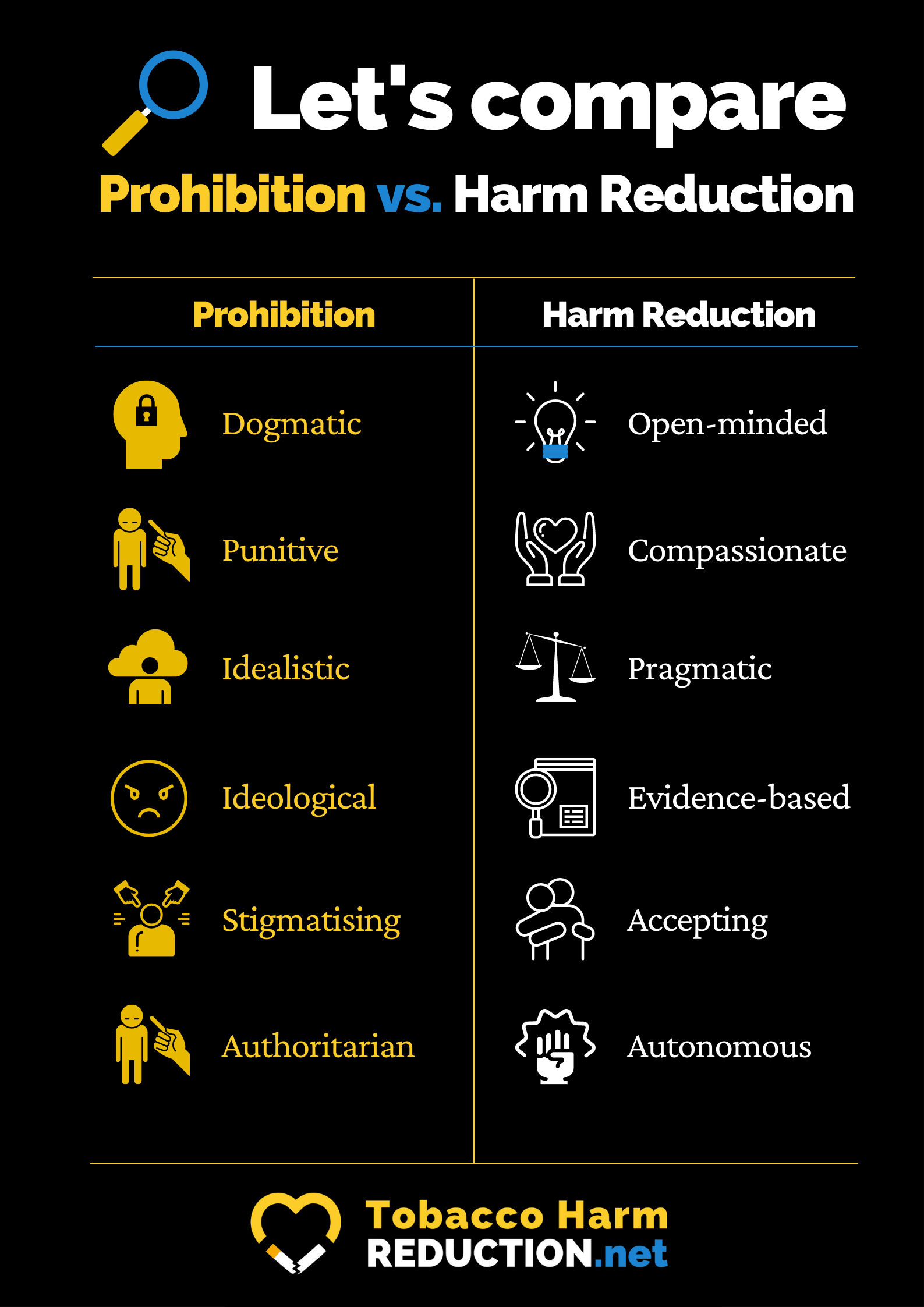